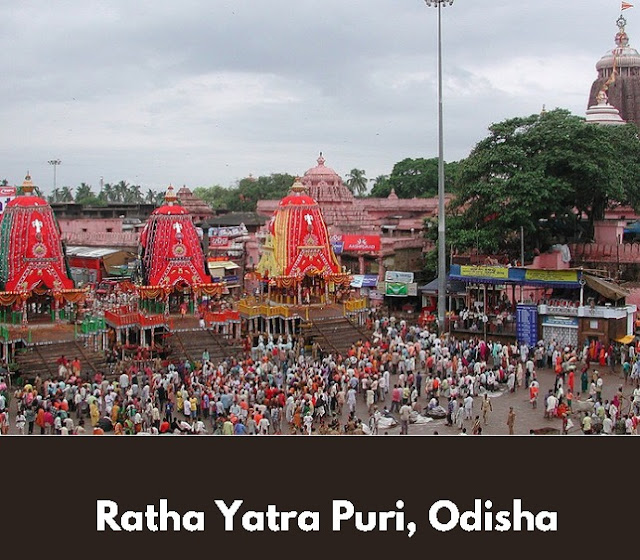 The Rath Yatra festival starts on the second lunar day (Dwitiya) the bright fortnight (Shukla paksha) of the Hindu month of Aashaadha.
One day before the Ratha Yatra, the Gundicha Temple is religiously cleansed for housing the gods.

Ratha Yatra is held at Shri Kshetra Puri Dham in the state of Odisha, India.

Rath Yatra or Jatra is the celebration of the Lord Jagannath, who is believed to be the Lord of Universe's journey towards his aunt's house called Gundicha Temple.

Jaganath Puri Ratha Yatra is the oldest Ratha Yatra, whose descriptions can be found in Brahma Purana, Padma Purana, and Skanda Purana and Kapila Samhita.

On the first day of the Ratha yatra, the deities are transported in chariots from the main temple to Gundicha temple.

The three deities, namely Jagannath, Balabhadra and Devi Subhadra are transported in three magnificent chariots, drawn by the numerous devotees gathered there.

The Ratha Yatra procession progresses down the 3 km long "Bada Danda" (long avenue) and reaches the gates of the Gundicha temple before nightfall. T

The deities remain in the chariots on the first day and enter the Gundicha Temple on the second day.

They reside at the Gundicha temple for the subsequent seven days

When is Lord Jaganath Ratha Yatra Dates for the 2022 ? 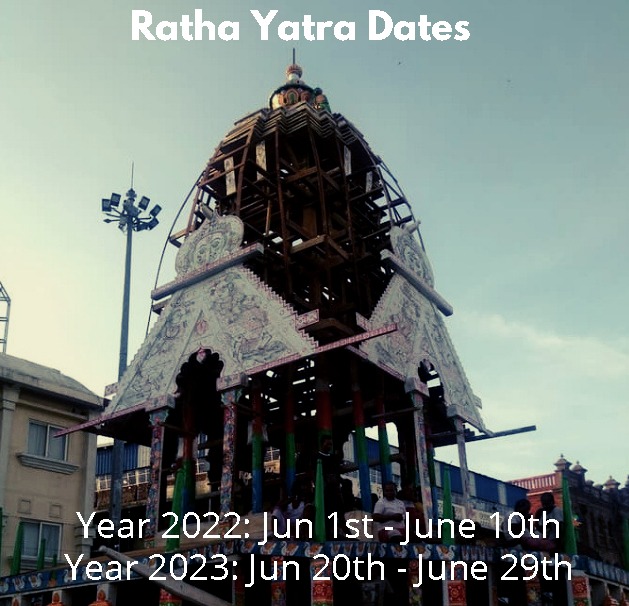 When is the Ratha Yatra Festival for the year 2023.?

What are the Names of  3 Chariots in Ratha Yatra?

The three chariots involved in the chariot procession are: one for each deity with central chariot called the Nandighosha, carrying the main deity of Lord Jagannath and the second chariot known as Taladhwaja carrying Lord Balabhadra, and the third chariot called the Darpadalana carrying Devi Subhadra.

The three deities are transported in three magnificent chariots, drawn by the numerous devotees gathered there.

Why Ratha Yatra is So Famous ? and Which God is  worshipped during Ratha Yatra.

It is Famous for its Grandeur and historical as well as Mythological significance.  Ratha Yatra's descriptions can be found in Brahma Purana, Padma Purana, and Skanda Purana and Kapila Samhita

The Jagannathism (a.k.a. Odia Vaishnavism) — the particular sector of Jagannath as a major deity emerged in the Early Middle Ages and later became an independent state regional temple-centered tradition of Krishnaism/Vaishnavism.

The Ratha Yatra festival has become a common sight in most major cities of the world since 1968 through the ISKCON Hare Krishna movement. By the mercy of Mahaprabhu Shri Jagannath and Chaitanya, A. C. Bhaktivedanta Swami Prabhupada had successfully transplanted the festival which now happens on an annual basis in places all over the world in over 108 cities.

Popular posts from this blog

June 06, 2016
O n 5th June 2016 Bayalish Mouza Vikash Parishad honored Meritious Students at Mahendrasmruti Nilakanthanath Vidyapitha, Barala, 42 Mouza. Arpita Parida of Kulasarichuan High School , Sibani Mohanty of Bentakar High School and Ayush Kumar Mohapathra of Saraswati Sishu Mandira are the toppers with 521, 501 and 493 marks respectively. 59 Students from Bayalish Mouza, emerging out of different villages, with great talent and we thank the Parishad to being very active in boosting these Brilliant Minds by facilitating them with Prizes and Guidance.
Post a Comment
Read more

December 01, 2015
Applications are invited from intending eligible candidates for the Warden(Ladies) and Accountant (Ladies) at Kasturba Gandhi Balika Vidyalayas , under SSA Gajapati District. The Application Form can be Downloaded from www.gajapati.nic.in website. Last Date of Application The Filled in applicaton should be addressed to the District Project Coordinator, SSA, Gajapati At/Po Paralakhemundi Dist: Gajapati and the same be submitted through registred post/speed post by 15.12.2015 The Engagement is Purely on contractual basis and subject to renewal on the basis of conditions stipulated in an agreement executed between the SC and selected candidate. Details Of  Vacant Post  Warden  -(1 Post : Ladies Only) Montly Honorarium - Rs 8400 Qualification :  B.A with B.Ed Age : 30 - 50 Years as on 1.1.2016 Accountant -(1 Post : Ladies Only) Montly Honorarium - Rs 5000 Qualification :  Degree in Commerce with Proficiency in accountancy and Computer application Age : less than
1 comment
Read more